The Mexican Cession probably made the Civil War inevitable. It may have happened anyway, but the debate it opened over the previously settled future of the West and thus the nation overturned the old political order built on keeping slavery out of national politics as much as possible. Possibly the South could have divided Texas into four or five new slave states to maintain parity in the Senate, but eventually they would exhaust that option and end up in a situation similar to what the Wilmot Proviso imagined. By pressing hard to secure slavery not just a place in the national future, but an unprecedented place of dominance, the South helped to create a broader antislavery coalition in the North which went on to elect an unremarkable one-term congressman and Illinois railroad lawyer president.

The sixth census shows the fruits of that war. I thought about creating a separate category for the new territories this census, something like the Far West, but as I compiled the figures I realized just how deeply Northern their demographics looked: overwhelmingly white (The census did not trace Hispanic origin.) with tiny numbers of slaves not so different from what many Northern states had in recent censuses. Texas and the Oregon Country (in the persons of Oregon and Washington Territories) make their first appearance as well. 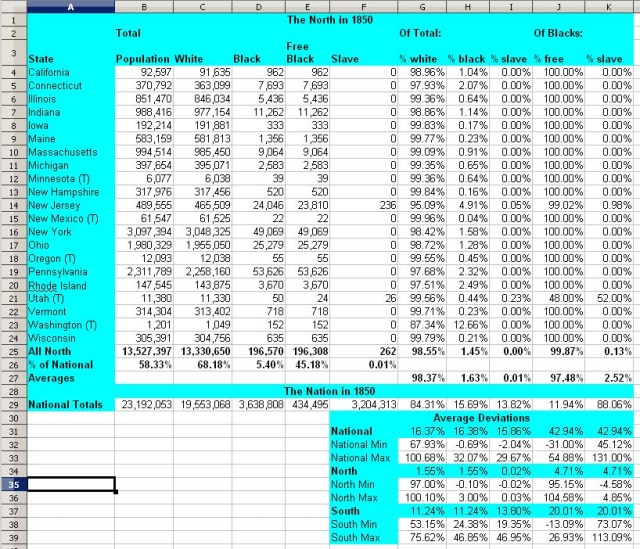 The North in the sixth census. (Click for a larger version.)

The North’s 0.01% share of the nation’s slaves amounted to 262 people, 236 of which lived in New Jersey where they constituted 0.05% of its population. The remaining 26 lived in the new Utah Territory, where they accounted for 0.23% of the population. The Armistice of 1850 organized Utah and New Mexico without reference to slavery at all. That usually gets reported as enacting popular sovereignty and they took from it authorization to enact slave codes. Legally that act made them slave territories but with so few people and so few slaves on top of the ambiguity in the Armistice makes their classification a matter of some interpretation. At any rate, New Jersey still held 90.08% of the North’s slave population. Most of the slaves who vanish from the census after 1840 benefit from the states electing to free superannuated slaves who fell through the cracks of their eighteenth century emancipation laws.

At this point looking at Northern standards seems almost futile, and of course the North all comes in well below the national norms for slavery. But by the section’s lights, anything above 0.03% enslaved counts as unusual. New Jersey and Utah both qualify, as one would expect when every other jurisdiction comes in with no slaves at all. Any slavery amounts to unusual slavery, by Northern standards, in 1850.

The South in the sixth census. (Click for a larger version.)

But just as by Northern standards any slavery violates the norm, by Southern standards a lack of slavery does the same. Anything below 19.35% enslaved puts a place out of pace with the section. That club includes Delaware, the District of Columbia, Maryland, and Missouri. With the exception of Kentucky, that list amounts to the border states of 1860.

On the other end of the scale, by sectional standards anything more than 46.95% enslaved stands out from the pack. Louisiana (47.28%), Mississippi (51.09%), and reigning slavery champion South Carolina (57.59%) hold that distinction. Given the demographics, one would expect those states to lead the way in fire-eating. South Carolina and Mississippi do not disappoint, but Louisiana stands a bit apart. Its sugar plantations survived largely due to protective tariffs, and its leaders knew it. The state also housed the South’s great metropolis and leading port, New Orleans. In contrast especially to South Carolina, Louisiana favored expansionism. The Carolina aristocrats, accustomed to their position as a permanent minority, disliked expansion because it threatened to upset the apple cart. In New Orleans, they dreamed of a cotton and sugar empire the embraced the whole Caribbean basin. Slavery joined them together, but did not make them identical.

Your input is welcome Cancel reply

This site uses Akismet to reduce spam. Learn how your comment data is processed.